A page from The Press and Sun-Bulletin in Binghamton, New York, from December 16, 1946. Two photographs and two captions describe the arrival of seven German women to New York from Berlin with their American military partners. The image entitled “Fraulein Invasion” shows five of these women, including Martha Frieda Lehmann, who is second from the left. Lehman accompanied Amasa Edward Hoyt, Jr. back from Berlin. The second image features the couple with a caption describing how they met.

Born on April 7, 1903, in Binghamton, New York, Amasa Edward Hoyt Jr. enlisted in the United States Army on May 13, 1918, at the age of fifteen. He was discharged on August 31, 1918, when the Army discovered that he lied on his enlistment form. This dishonorable discharge would have made it impossible for Hoyt to be buried at Florida National Cemetery. However, an Act of Congress on March 3, 1936, upheld that soldiers who sought to serve before the legal age be “considered to have been honorably discharged,” recognizing their desire to serve their nation during wartime. Hoyt later served in World War II as a second lieutenant, and his unit occupied Berlin during the post-war period. While in Berlin, he met Martha Lehmann, who worked in a United States military office there. She returned to the United States with him as his fiancé in 1946, and they married in 1947. The two divorced in 1953. Hoyt was eventually appointed as a postmaster for Florida by President John F. Kennedy. He passed away on November 22, 1989, and is buried in Florida National Cemetery in Bushnell.

Originally created and published by The Press and Sun-Bulletin.

Copyright to this resource is held by The Press and Sun-Bulletin and is provided here by RICHES for educational purposes only. 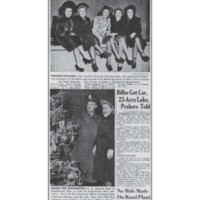