The Fifteenth United States Census records for East Orange, New Jersey, for 1930. The census divides the population into categories of name, age, sex, race, marital status, occupants and relation to head of house, whether the home is owned or rented, value of home or rent, whether home is a farm residence, and whether the home has a radio. It also records college attendance, literacy, birthplace and birthplace of parents, citizenship status, language spoken before coming to United States, year of immigration, occupation or business, class of worker, whether they worked the previous day, military status, and the war or expedition participated in.

A notable resident listed is Robert Clark Kates (1918-1996). Born on March 6, 1918, in Newark, New Jersey, Kates served a long career in the United States Army. He graduated from the United State Military Academy at West Point in 1942 and became an officer in the United States Coast Artillery Corps. In 1953, after obtaining a law degree from Georgetown University, Kates transferred to the Judge Advocate General’s Corps (JAG). After his service, Kates taught at the University of Georgia before moving to Nassau, Florida. He died on April 29, 1966, and is buried in the Florida National Cemetery in Bushnell, Florida.

Originally created by Harry Waters and published by the United States Census Bureau. 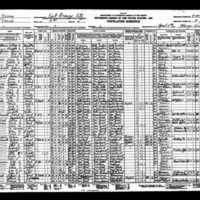