Muster Roll of the Crew of the U.S. Navy Yard, Pearl Harbor, T.H.

Muster Roll of the Crew of the U.S. Navy Yard, Pearl Harbor, T.H.

Muster Roll of the Crew of the US Navy Yard, Pearl Harbor, TH

Page of the muster roll of the crew of the U.S. Navy Yard, in Pearl Harbor, Hawaii. The document lists the names, field or service number, present rating, date of enlistment, and first date received on board. The roll was compiled on June 30, 1942.

A notable soldier listed in the document is Ralph Edward King (1920-1995). Born on May 2, 1920, in Sanford, Florida, King enlisted in the United States Navy on March 14, 1939. He was assigned to the Dobbin-class destroyer USS Whitney in Pearl Harbor by 1940. Approximately ninety percent of the crew were on board when the Japanese attacked on December 7, 1941. In January 1943, King and the USS Whitney were deployed into World War II. The Whitney returned to Pearl Harbor in January 1946, and sometime between then and October of the same year, King was transferred to the USS Deliver, a Diver Class Rescue and Salvage Ship. At the time of his discharge, King held the rank of Engineman Chief Petty Officer. He spent time as a Chief Engineer for the Merchant Marines. After leaving the Navy, King returned to Sanford and married his wife, Norma. In 1956, he moved to Lutz, Florida, where he would live out the rest of his days. King passed away on May 17, 1995, at the age of 75. He is memorialized at the Florida National Cemetery in Bushnell, Florida.

Originally produced and published by the Naval Transportation Service. 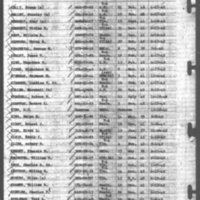