The draft registration card for William Richard King (1927-1992). The card lists a serial number, the name of the registrant, the order number, the place of residence, the mailing address, telephone, age, place of birth, state, date of birth, the reference and their address, their employer and place of employment.

Born in Clarksburg, West Virginia, on March 7, 1927, King enlisted in the United States Army Air Forces on May 12, 1945, two months after his 18th birthday. He completed his tour of duty on October 31, 1949, then re-enlisted on July 28, 1950, at the rank of sergeant, to serve in the Korean War. King’s wife, Annemarie, immigrated to the United States on May 7, 1951, along with their daughter, Ellen Jean Stritter. Despite arriving with a marriage certificate, William and Annemarie were married again in the United States. King served in both the Korean and Vietnam Wars before his honorable discharge from military service on February 28, 1966. In 1974, William and Annemarie moved to Spring Hill, Florida, where their son Ralph also lived. William King died of natural causes on May 19, 1992, in Tampa, Florida. On March 17, 1995, a headstone was erected at the Florida National Cemetery. 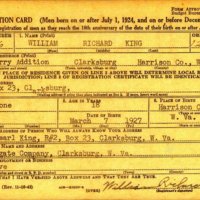