The Fifteenth United States Census records for Clark District, Harrison County, West Virginia, for 1930. The census divides the population into categories of name, age, sex, race, marital status, occupants and relation to head of house, whether the home is owned or rented, value of home or rent, whether home is a farm residence, and whether the home has a radio. It also records college attendance, literacy, birthplace and birthplace of parents, citizenship status, language spoken before coming to United States, year of immigration, occupation or business, class of worker, whether they worked the previous day, military status, and the war or expedition participated in.

A notable resident listed is William Richard King (1927-1992). Born in Clarksburg, West Virginia, on March 7, 1927, King enlisted in the United States Army Air Forces on May 12, 1945, two months after his 18th birthday. He completed his tour of duty on October 31, 1949, then re-enlisted on July 28, 1950, at the rank of sergeant, to serve in the Korean War. King’s wife, Annemarie, immigrated to the United States on May 7, 1951, along with their daughter, Ellen Jean Stritter. Despite arriving with a marriage certificate, William and Annemarie were married again in the United States. King served in both the Korean and Vietnam Wars before his honorable discharge from military service on February 28, 1966. In 1974, William and Annemarie moved to Spring Hill, Florida, where their son Ralph also lived. William King died of natural causes on May 19, 1992, in Tampa, Florida. On March 17, 1995, a headstone was erected at the Florida National Cemetery. 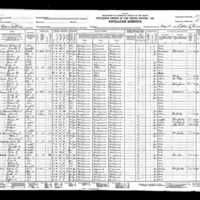