Postcard showing the Orlando skyline in a night scene as seen from the eastern side of Lake Eola Park. Some of the buildings shown are the Angebilt Hotel, the Orange County Courthouse, and the Lake Eola Band Stand. Lake Eola and the park that surrounds it are one of the unusual features that sets the city of Orlando apart from other places. From its earliest days Downtown Orlando was situated on the west side of the lake. As the town grew into a city, Lake Eola continued to be a focal point for the inhabitants, who used it for bathing, swimming and fishing, while on its shores people picnicked, listened to concerts and religious services. Much of the land around Lake Eola was donated to Orlando by Jacob Summerlin who designated that it be a public park. It has remained one ever since. The rest of the park land was donated by the Musselwhite Family and Mayor Frank Sperry.

Copyright to this resource is held by E. C. Kropp Company and is provided here by RICHES of Central Florida for educational purposes only.

This picture embraces much that is typical of Orlando. The skyline across Lake Eola, one of the 31 lakes within the city limits; the flowers, palm and oak its beautification; Memorial High School building on the right and band stand its educational and recreational life; the Angebilt Hotel and two bank buildings its commercial life; the Court House its civic life; the Masonic Temple its fraternal spirit; Rosalind Club its social life and church its religious atmosphere. 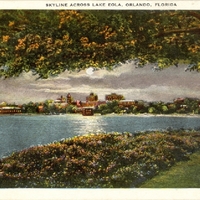