The draft registration card for Sheldon Paul McCloskey (1919-1996). The card contains the demographic information for the soldier including name, home address, telephone number, age in years, date of birth, place of birth, name of person who will always know your address, their relationship to applicant, their address, employer's name, race, height, weight, complexion, and other obvious physical characteristics. The Selective Training and Service Act of 1940 was the first peacetime conscription in United States history. Men between the ages of 21 and 36 were required to register with local draft boards and were selected by lottery.

Born to James and Dessie McCloskey on April 15, 1919, in Hollidaysburg, Pennsylvania, Sheldon worked for the Pennsylvania Railroad Company with his father as a railcar builder after graduating high school. He registered for the World War II draft on October 16, 1940, but eventually enlisted in the United States Navy on June 3, 1944. During his time in the Navy, he served on two submarine tender ships: the USS Orion and the USS Sperry. McCloskey left the Navy on February 15, 1946. After the war, he retuned to Washington DC and joined the Marine Corps reserve squadron VMF-321, achieving the rank of Sargent. McCloskey died on November 1, 1996, and is memorialized in Florida National Cemetery in Bushnell, Florida. 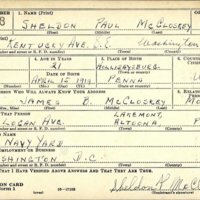