A newspaper article in the Cumberland Sunday Times, announcing the wedding of Richard McElwee, Jr. and Mary Lou Milleson. The couple's son, Richard Paul McElwee, was born in Cumberland, Maryland, on August 26, 1947. He either enlisted or was drafted into the United States Navy on June 12, 1968. He retired as a Seaman (SN) on April 17, 1970. As a Seaman, McElwee was assigned general duty deck and administrative work. In 1982, Richard Paul McElwee moved to Palm Bay, Florida, where he married and had one daughter, Stefani. He worked as a landscaper and nurseryman. McElwee passed away on August 8, 1994, and is memorialized in Florida National Cemetery in Bushnell, FL, on March 9, 1995.

Originally created and published by The Cumberland Sunday Times.

Copyright to this resource is held by The Cumberland Sunday Times and is provided here by RICHES for educational purposes only. 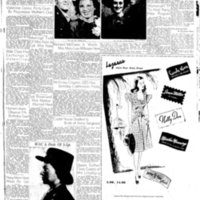