The draft registration card for Earl Henry Patterson (1898-1971). The card lists a serial number, the name of the registrant, the order number, the place of residence, the mailing address, telephone, age, place of birth, state, date of birth, the reference and their address, their employer and place of employment.

Born in Van Buren, Indiana, on February 6, 1898, Patterson served as a Boatswain's Mate in the United States Coast Guard during World War I. After the war, he moved to Washington D.C., and married Clarice Wampler. Patterson served with the Coast Guard again during World War II. In 1970, the Pattersons moved to Florida to retire. He passed away a year later, on June 13, 1971, and is buried at the Florida National Cemetery, in Bushnell, Florida. 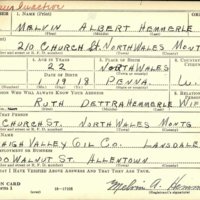