A page from the 1958 City Directory for Canton, New York. The directory lists the names of the head of the household and in the case of a married man, the name of his wife. The directory also gives shorthand descriptions of the occupation and place of employment of the head of the household as well as their address. Advertisements from local businesses are also included.

A notable individual listed is Nelson Phelps (1899-1989). Born on August 4, 1899, in Gouverneur, New York, Phelps served in the United States Navy during World War I after enlisting on January 28, 1918. He served as a Landsman for Electrician General Training at the Naval Training Station in Newport, Rhode Island, and the Naval Operating Station in Hampton Roads, Virginia. After the war, he returned to New York, marrying Marguerite Magdaline Burkhard, and fathering two daughters: Margaretta and Catherine. He spent much of his working life as a superintendent and inspector at the Sheffield Farms Milk Company. After retirement, he and his wife moved to Hillsborough County, Florida. Phelps died on March 22, 1989, and is buried at Florida National Cemetery in Bushnell, Florida.

Originally created and produced by the City of Canton. 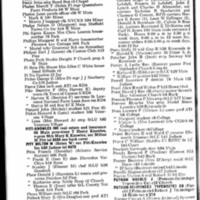