The abstract of World War I military service for Nelson Phelps (1899-1989). The abstract features Phelp’s name and service number, his enlistment location and date, his age at entrance, current rank, home address, duty stations and time periods of service, discharge date and location and rank at discharge.

Born on August 4, 1899, in Gouverneur, New York, Phelps served in the United States Navy during World War I after enlisting on January 28, 1918. He served as a Landsman for Electrician General Training at the Naval Training Station in Newport, Rhode Island, and the Naval Operating Station in Hampton Roads, Virginia. After the war, he returned to New York, marrying Marguerite Magdaline Burkhard, and fathering two daughters: Margaretta and Catherine. He spent much of his working life as a superintendent and inspector at the Sheffield Farms Milk Company. After retirement, he and his wife moved to Hillsborough County, Florida. Phelps died on March 22, 1989, and is buried at Florida National Cemetery in Bushnell, Florida. 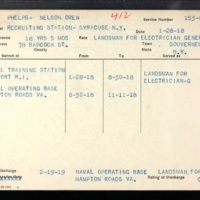