The draft registration card for Felix A. Prendota (1895-1988). The card contains the demographic information for the soldier including name, telephone number, age, place of birth, date of birth, name and address of person who will always know your address, employer's name and address, place of employment, race, height, weight, eye color, hair color, and complexion. The Fourth Registration, often referred to as the "old man's registration", was conducted on April 27, 1942.

Felix Prendota was born on November 17, 1895, in Chicago, Illinois, to Polish immigrants. He enlisted in the United States Army on April 30, 1917, and was assigned to Battery A of the 12th Field Artillery. He shipped out to Europe on January 11, 1918. He engaged in the battles of Aisne, Aisne-Marne, St. Mihiel, Meuse-Argonne, Lorraine, and Ile de France. Although Prendota left Europe on July 30, 1919, he remained in the United States Army for over fifteen years. He was attached to the 15th Infantry, which protected American interests in China leading up to the Chinese Communist Revolution. He retired to Winter Park, Florida, with his wife, Ruby. Prendota died on September 15, 1988, at the age of ninety-two, and is buried at Florida National Cemetery in Bushnell, Florida. 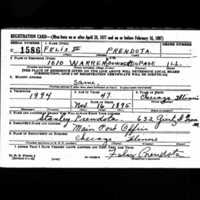 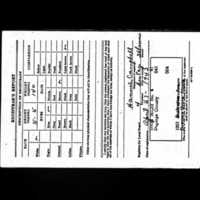