Passenger List of Organizations and Casuals Returning to the United States

Passenger List of Organizations and Casuals Returning to the United States

The passenger list of organizations and casuals for the Leviathan from Brest, France, to Hoboken, New Jersey, on August 6, 1919. The document includes the soldier's number, name, rank, regiment, corps or department, emergency contact, and address. On this ship are members of Battery "A" of the 12th Field Artillery.

A notable soldier listed in the record is Felix Prendota (1895-1988). Born on November 17, 1895, in Chicago, Illinois, to Polish immigrants, Pendota enlisted in the United States Army on April 30, 1917, and was assigned to Battery A of the 12th Field Artillery. He shipped out to Europe on January 11, 1918. He engaged in the battles of Aisne, Aisne-Marne, St. Mihiel, Meuse-Argonne, Lorraine, and Ile de France. Although Prendota left Europe on July 30, 1919, he remained in the United States Army for over fifteen years. He was attached to the 15th Infantry, which protected American interests in China leading up to the Chinese Communist Revolution. He retired to Winter Park, Florida, with his wife, Ruby. Prendota died on September 15, 1988, at the age of ninety-two, and is buried at Florida National Cemetery in Bushnell, Florida. 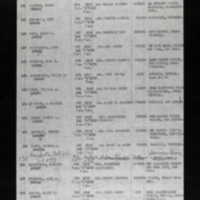