The draft registration card for Hylon Oliver Broadbrook (1893-1973), who enlisted in the United States military for the second time during World War II. The card lists a serial number, the name of the registrant, the order number, the place of residence, the mailing address, telephone, age, place of birth, state, date of birth, the reference and their address, their employer and place of employment.

Born on March 24, 1893, in Bridgeport, Connecticut, Broadbrook was the son of John and Laura Broadbrook. He enlisted in the United States Army on May 21, 1913, prior to the outbreak of World War I. He joined the 16th Cavalry Regiment and was assigned to the Mexican Border War, which was a part of the Mexican Revolution. Broadbrook earned the rank of corporal on January 10, 1917, and Sargent on September 9, 1917. After his service in the Mexican Border War, Broadbrook attended Officer Training School in 1918, and Machine Gun School in 1919. After his service ended in May of 1920, Broadbrook returned to Bridgeport, Connecticut, where he worked as a printer. He later died in Oswego, New York, on June 18, 1973, while visiting family. He is memorialized in Florida National Cemetery in Bushnell, Florida. 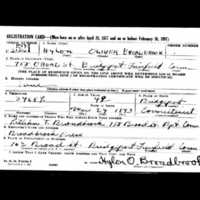