A unit diary for the United States Marine Corps in April of 1951. The muster roll describes the journey that Elmer B. Denico Jr. (1928-2002) took to get to Korea. Transferring in San Francisco, Denico sailed on the USS General Mann (TAP-112), a troop transport ship, to Yokohama, Japan, and from there to Korea, where he arrived in April of 1951.

Elmer B. Denico Jr. was born on February 17, 1928, in Fairfield, Maine, to Elmer B. Denico and Ezilda (Ezelda) Denico. He joined the United States Marine Corps on January 28, 1948. He served for nearly twenty years, retiring in 1967, after serving in both the Korean and Vietnam Wars. When he retired, he had reached the rank of Staff Sergeant. He passed away in Polk City, Florida, on March 29, 2002, and is memorialized in Florida National Cemetery in Bushnell, Florida. 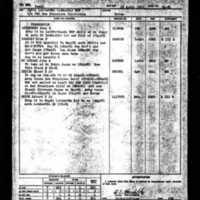