The Fifteenth United States census records for Fairfield, Somerset County, Maine, for 1930. The census divides the population into categories of name, age, sex, race, marital status, occupants and relation to head of house, whether the home is owned or rented, value of home or rent, whether home is a farm residence, whether the home has a radio. It also records college attendance, literacy, birthplace and birthplace of parents, citizenship status, language spoken before coming to United States, year of immigration, occupation or business, class of worker, whether they worked the previous day, military status, and the war or expedition participated in.

A notable resident listed in the record is Elmer B. Denico Jr. (1928-2002). Denico Jr. was born on February 17, 1928, in Fairfield, Maine, to Elmer B. Denico and Ezilda (Ezelda) Denico. He joined the United States Marine Corps on January 28, 1948. He served for nearly twenty years, retiring in 1967, after serving in both the Korean and Vietnam Wars. When he retired, he had reached the rank of Staff Sergeant. He passed away in Polk City, Florida, on March 29, 2002, and is memorialized in Florida National Cemetery in Bushnell, Florida.

Digital reproduction of original census record by Erlan B. Emerly, 1930.

Originally created by Erlan B. Emery and published by the United States Census Bureau. 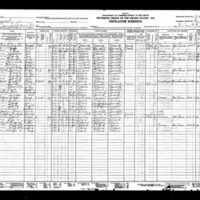