The war diary of William Graf Eppright (1923-1945). The diary records Eppright's activity between August 8 and August 10, 1945, which was the date that he was killed in action. The document was declassified on December 31, 2012.

Born on May 3, 1923, Eppright ran track in high school. On June 30, 1942, he registered for the draft. On October 1, 1942, he began his service in the United States Navy. He served in the Domestic Service and Foreign Service. On January 27, 1945, he married Mildred Anna Brady. In August of 1945, he was assigned to the USS Siboney. On August 10, 1945, the aircraft collided in the air, and Eppright was among the six pilots and crewmen presumed lost and killed in action. He is memorialized in Florida National Cemetery in Bushnell, Florida. 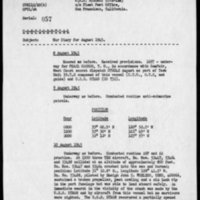