The Sixteenth United States Census records for Staten Island, Richmond Borough, New York, for 1940. The census divides the population by name, age, sex, race, marital status, residence, home owned or rented, value of home or monthly rent, whether living on a farm, other residents of same address, relation to head of house, attended school or college after March 1940, highest grade completed, state or foreign country of birth, employment status, hours of work per week, duration of employment, and wages. Supplemental questions include the father and mother's birthplace, language spoken in home during childhood, veteran status, father's veteran status, social security, usual occupation and industry, class of worker, if women have been married more than once, age at first marriage if so, and number of children born.

A notable resident listed in the record is Terence Halligan (1922-1944). Born on April 3, 1922, in Northern Ireland, Halligan and his parents immigrated to the United States in the 1920s, settling in New Jersey and New York. After high school, Halligan worked as a longshoreman, loading and unloading cargo onto ships. On March 20, 1942, Halligan enlisted in the United States Army Air Corps, where he served as a navigator with the 320th Bombardment Group in the 441st Bomb Squadron. He served in the North African and Mediterranean Theaters of the war as a Lieutenant. After a mission off the coast of Italy on March 16, 1944, the right engine of the aircraft that Halligan served on caught fire and those on board parachuted off. While witnesses saw Halligan land safely on shore, the group was captured by Germans and his status thereafter is unknown. On August 18, 1945, the Army officially declared him missing in action. For his actions and sacrifice, Halligan earned an Air Medal with Three Oak Leaf Clusters and a Purple Heart. The Florida National Cemetery in Bushnell, Florida placed a memorial headstone in his memory. Halligan is also memorialized on the Tablets for the Missing at the Sicily-Rome American Cemetery and Memorial in Nettuno, Italy. 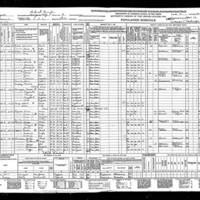