The individual casualty questionnaire for the Unites States Army Air Forces on March 16, 1944. The Missing Air Crew Report was organized in response to the status of the 12th Air Force, 320th Bombardment Group, 441th Bomb Squadron, which left from Decimomannu Air Force Base in Sardinia for their target in Aquina, Italy. Eight passengers were on board and seven parachutes were reported to have been opened. Some were captured by the Germans and others were unaccounted for.

A notable solider from the squadron was Terance Halligan (1922-1944). Born on April 3, 1922, in Northern Ireland, Halligan and his parents immigrated to the United States in the 1920s, settling in New Jersey and New York. After high school, Halligan worked as a longshoreman, loading and unloading cargo onto ships. On March 20, 1942, Halligan enlisted in the United States Army Air Corps, where he served as a navigator with the 320th Bombardment Group in the 441st Bomb Squadron. He served in the North African and Mediterranean Theaters of the war as a Lieutenant. After a mission off the coast of Italy on March 16, 1944, the right engine of the aircraft that Halligan served on caught fire and those on board parachuted off. While witnesses saw Halligan land safely on shore, the group was captured by Germans and his status thereafter is unknown. On August 18, 1945, the Army officially declared him missing in action. For his actions and sacrifice, Halligan earned an Air Medal with Three Oak Leaf Clusters and a Purple Heart. The Florida National Cemetery in Bushnell, Florida placed a memorial headstone in his memory. Halligan is also memorialized on the Tablets for the Missing at the Sicily-Rome American Cemetery and Memorial in Nettuno, Italy. 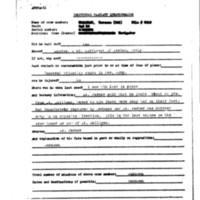