The draft registration card for Richard Clifton Jones (1921-1995). The card lists a serial number, the name of the registrant, the order number, the place of residence, the mailing address, telephone, age, place of birth, state, date of birth, the reference and their address, their employer and place of employment.

A notable resident listed in the record is Richard Clifton Jones (1921-1995). Born on April 25, 1921, Jones lived and worked on the family farm in Poca, West Virginia. On July 24, 1942, he was drafted into the United States Army. He served until October 17, 1948, and reached the rank of Staff Sergeant. He married Erna Kapziowiski, with whom he had two sons: Richard and Carl. The family moved to Spring Hill, Florida, in 1987, where Jones worked as an electrician. He passed away on May 31, 1995, and is buried at Florida National Cemetery in Bushnell, Florida.

1 draft registration card, front and back 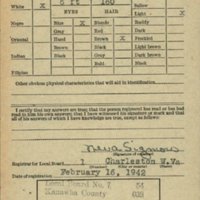 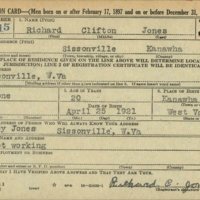