The Index to Births for the state of Massachusetts from 1946 through 1950. The index lists the names those born, the year and town in which they were born, and the volume and page in which the record appears.

A notable resident listed in the record is William H. Soucie (1909-1996). Born on October 9, 1909, in Portland, Connecticut, Soucie enlisted in the United States Army on June 21, 1935. Upon completion of his first four-year enlistment, Soucie returned to civilian life as a mill hand in Western Massachusetts on August 21, 1939. He re-enlisted in the Army twenty-four days after the United Sates declared war on Japan, serving in the United States Army Air Force from 1941 until 1947. At the end of this stint, he took less than a month break before joining the newly-formed Department of the Air Force. In the Air Force, Soucie fought in the Korean War. He actively participated in the Veterans of Foreign Wars organization throughout the 1950s and 1960s. He retired to Port Richey, Florida, in 1967, where he passed away pm December 11, 1996. He is buried in the Florida National Cemetery in Bushnell.

Originally created and published by the Massachusetts Department of Public Health. 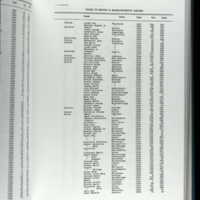