The Sixteenth Unites States Census records for Lafayette County, Florida, for 1940. The census divides the population by name, age, sex, race, marital status, residence, home owned or rented, value of home or monthly rent, whether living on a farm, other residents of same address, relation to head of house, attended school or college after March 1940, highest grade completed, state or foreign country of birth, employment status, hours of work per week, duration of employment, and wages. Supplemental questions include the father and mother's birthplace, language spoken in home during childhood, veteran status, father's veteran status, social security, usual occupation and industry, class of worker, if women have been married more than once, age at first marriage if so, and number of children born.

A notable resident listed in the record is William H. Soucie (1909-1996). Born on October 9, 1909, in Portland, Connecticut, Soucie enlisted in the United States Army on June 21, 1935. Upon completion of his first four-year enlistment, Soucie returned to civilian life as a mill hand in Western Massachusetts on August 21, 1939. He re-enlisted in the Army twenty-four days after the United Sates declared war on Japan, serving in the United States Army Air Force from 1941 until 1947. At the end of this stint, he took less than a month break before joining the newly-formed Department of the Air Force. In the Air Force, Soucie fought in the Korean War. He actively participated in the Veterans of Foreign Wars organization throughout the 1950s and 1960s. He retired to Port Richey, Florida, in 1967, where he passed away pm December 11, 1996. He is buried in the Florida National Cemetery in Bushnell. 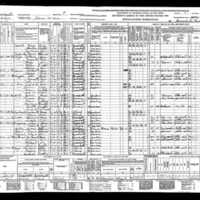