A page from the Benjamin Franklin High School Yearbook in Rochester, New York, in 1940. The page contains images of the students with their names, home addresses, and clubs and organizations they participated in.

A notable student listed is Richard H. Vaisey (1924-1996). Born on October 18, 1924, in Rochester, New York, Vaisey completed three years of high school before enlisting in the United States Army at the age of eighteen in November 1942. Vaisey served on a mortar squadron in the Southwest Pacific Ocean during World War II. He was discharged on January 11, 1946, and returned home to Rochester, where he worked as a lineman for Rochester Gas and Electric. He retired to Venice, Florida, where he passed away on December 28, 1996. He is memorialized at Florida National Cemetery in Bushnell. 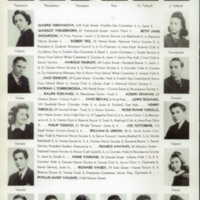