A magazine article published by The Air Force Official Service Journal in May of 1943. The article describes an instituted policy of filming important surgical operations performed at the Base Hospital at Wendover Field, Utah. The first filmed operation was on William Woznak (1919-1997).

Born on August 5, 1919, in Montreal, Canada, William Woznak's family immigrated to Michigan. He enlisted in the United States Army Air Corps on January 6, 1942, serving on the Repair Squadron at Wendover Field in Utah. After the war, Woznak returned to Michigan and married Elizabeth Beatrice Genick. He fathered three children, named Marian, Bill, and Walter. By the 1970s, the family moved to Naples, Florida, where Woznak worked as a realtor and building consultant. He died on January 28, 1997, in Naples, and is memorialized at the Florida National Cemetery in Bushnell.

Copyright to this resource is held by Air Force Magazine and is provided here by RICHES for educational purposes only. 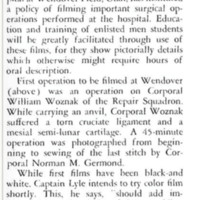