The Fifteenth United States Census records for North Braddock, Pennsylvania, for 1930. The census divides the population into categories of name, age, sex, race, marital status, occupants and relation to head of house, whether the home is owned or rented, value of home or rent, whether home is a farm residence, whether the home has a radio. It also records college attendance, literacy, birthplace and birthplace of parents, citizenship status, language spoken before coming to United States, year of immigration, occupation or business, class of worker, whether they worked the previous day, military status, and the war or expedition participated in.

A notable resident listed in this record is Leroy Joseph Zavada (1926-2009). Born on November 27, 1926, in the suburbs of Pittsburgh, Pennsylvania, his parents, Joseph and Mary Zavada, were Czech immigrants who came to the United States in 1910. Zavada enlisted in the United States Army at the age of eighteen, just before the end of World War II. In 1945, he enrolled in the Army Air Force Training Command’s basic airplane and engine mechanics course at Keesler Field, Mississippi. In June of 1949, Zavada graduated from the Pennsylvania State College of Optometry in Philadelphia, and worked as an optometrist for most of his life. Leroy J. Zavada died in Leesburg, Florida, in 2009, and was buried at Florida National Cemetery in Bushnell.

Originally created and produced by the United States Census Bureau. 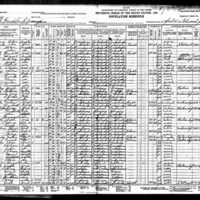