What Can Make ACUVUE Disposable Contact Lenses Even Better?

A newspaper advertisement published in The Pittsburgh Post-Gazette on May 3, 1990. The advertisement is for an open house from Eye Care Associates. A notable doctor who worked for the company was Dr. Leroy Joseph Zavada. (1926-2009). Born on November 27, 1926, in the suburbs of Pittsburgh, Pennsylvania, his parents, Joseph and Mary Zavada, were Czech immigrants who came to the United States in 1910. Zavada enlisted in the United States Army at the age of eighteen, just before the end of World War II. In 1945, he enrolled in the Army Air Force Training Command’s basic airplane and engine mechanics course at Keesler Field, Mississippi. In June of 1949, Zavada graduated from the Pennsylvania State College of Optometry in Philadelphia, and worked as an optometrist for most of his life. Leroy J. Zavada died in Leesburg, Florida, in 2009, and was buried at Florida National Cemetery in Bushnell.

Originally created and published by the Pittsburgh Post-Gazette.

Copyright to this resource is held by Pittsburgh Post-Gazette and is provided here by RICHES for educational purposes only. 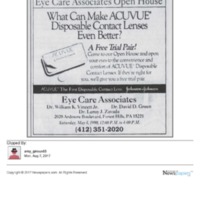