A newspaper article published in The St. Louis Post-Dispatch on October 22, 1918. The article reports that Wesley John Zimmerman (1893-1990) was wounded on the first day of the Meuse-Argonne Offensive on September 26, 1918. He was attached to the 138th Infantry Division, which suffered heavy casualties that day.

Born on August 20, 1893, in St. Louis, Missouri, Zimmerman joined the United States Army in 1917. Originally an infantry cook, he was later transferred to the front as a machine gunner with the 140th Infantry Division. After his service, Zimmerman returned to St. Louis and married Agnes Maines. He would stay in St. Louis for the remainder of his working life. He retired to Florida during the 1960s, where he spent the rest of his life. Zimmerman died on July 27, 1981, and was buried at Florida National Cemetery in Bushnell.

Originally created and published by the St. Louis Post-Dispatch.

Copyright to this resource is held by the St. Louis Post-Dispatch and is provided here by RICHES for educational purposes only. 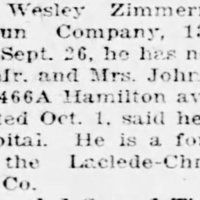