Award of the Valorous Unit Award

Confidential document describing valorous acts conducted in Vietnam between 1969 and 1970. The 15th Medical Battalion received the Valorous Unit Award for treating casualties in the heat of battle and experiencing no injures to any of the medical personnel.

A notable soldier included in the report is Gil Ramos-Rivera (1925-1970). Born on September 5, 1925, in Puerto Rico, Ramos-Rivera grew up the son of a military officer, living most of his early life on Henry Barracks in Cayey, Puerto Rico. His twenty-year career in the United States Army began on October 11, 1950, and lasted until November 1, 1970. He served in both the Korean and Vietnam Wars, and received a Purple Heart. After his retirement from the Army, he moved to Florida, where he spent the rest of his life. On March 17, 1996, Ramos-Rivera passed away at the age of seventy. The Florida National Cemetery in Bushnell, Florida, placed a memorial headstone in honor of Ramos-Rivera and his service.

Originally created and produced by the United States Army. 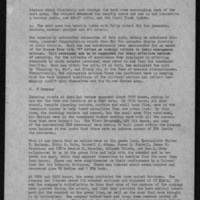