The city directory for Middletown, New York, for 1945. This public record served to provide an alphabetical list of citizens by head of household, their address, and relevant occupational information. A spouse’s name is listed next to the head of household. Death dates of those who have been previously listed in the directory are also included.

A notable resident listed in this record is Joseph W. Radivoy (1921-1995). Born in Middletown, New York, in 1921, Radivoy's father had immigrated to the United States from Austria in the early 1900s, and his mother was born in New York. Radivoy served in the United States National Guard in 1940, and then served in the United States Army during World War II. He rose to the rank of Technician Fifth Grade during his service. After the war, he returned to New York and worked in the restaurant industry throughout much of his life, eventually owning Joe’s Tavern. In addition to living in Middletown, he lived in Rock Hills, New York, and later moved to Holiday, Florida, where he passed away in 1995. He was buried at Wallkill Cemetery in Middletown, New York, and is memorialized at Florida National Cemetery, in Bushnell, Florida.

Originally created and published by the City of Middletown, New York . 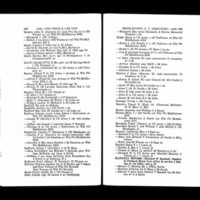