The abstract of World War II military service for Joseph W. Radivoy (1921-1995). The document includes Radivoy's name, home address, date of enlistment, the artillery he enlisted in, the number of years enlisted, how he was separated from active service, what he re-enlisted in and when.

Born in Middletown, New York, in 1921, Radivoy's father had immigrated to the United States from Austria in the early 1900s, and his mother was born in New York. Radivoy served in the United States National Guard in 1940, and then served in the United States Army during World War II. He rose to the rank of Technician Fifth Grade during his service. After the war, he returned to New York and worked in the restaurant industry throughout much of his life, eventually owning Joe’s Tavern. In addition to living in Middletown, he lived in Rock Hills, New York, and later moved to Holiday, Florida, where he passed away in 1995. He was buried at Wallkill Cemetery in Middletown, New York, and is memorialized at Florida National Cemetery, in Bushnell, Florida.

Originally created and published by the Adjutant General’s office. 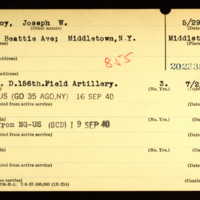