A stained glass image of the RCA Corporation logo, which appeared on the Nipper Building in Camden, New Jersey. The dog in the image, dubbed “Nipper,” is listening to a Victor Talking Machine.

A notable "machinist" for the Victor Talking Machine Company was Irick Ritezendollar (1898-1992). Born on January 1, 1898, in Chatsworth, New Jersey, Ritzendollar enlisted in the United States Army on September 5, 1918. His served for slightly more than three months before being discharged on December 14, 1918. Unlike his siblings, Ritzendollar stayed out of the spotlight. He married Ella S. Ritzendollar sometime between 1922 and 1923. By 1940, he was working as a pump man for Works Progress Administration (WPA) Road Construction. At some point, Ritzendollar moved to Wauchula, Florida, and later relocated to Lakeland, Florida. Irick Ritzendollar passed away on September 14, 1992, at the age of ninety-three. He is buried at Florida National Cemetery in Bushnell, Florida.

Copyright to this resource is held by Hoag Levins and is provided here by RICHES for educational purposes only. 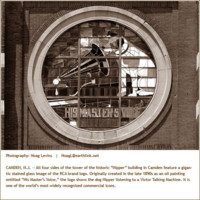