The draft registration card for Sellers Boynton Rogers (1917-1996). The card contains the demographic information for the soldier including name, home address, telephone number, age in years, date of birth, place of birth, name of person who will always know your address, their relationship to applicant, their address, employer's name, race, height, weight, complexion, and other obvious physical characteristics. The Selective Training and Service Act of 1940 was the first peacetime conscription in United States history. Men between the ages of 21 and 36 were required to register with local draft boards and were selected by lottery.

Born on October 25, 1917, in Arlington, Georgia, Rogers registered for the draft on October 16, 1940, while living in St. Petersburg, Florida. He enlisted in the United States Army on June 25, 1941, at Camp Blanding, Florida. Rogers served as a Combat Medic in the Pacific Campaigns of World War II. He participated in campaigns of New Georgia, Bougainville, Manila, and Luzon. He awarded the Silver Star for rescuing a comrade while under mortar fire in Lunzon. He also was awarded the Purple Heart for being wounded during these actions. Rogers moved to Miami, Florida, following his discharge from the Army on September 12, 1945. He married Margaret E. Mann a year later, on August 8, 1946. He and Margaret spent the majority of their lives in the Miami area until his death on January 12, 1996. Sellers Rogers is buried at the Florida National Cemetery in Bushnell, Florida. 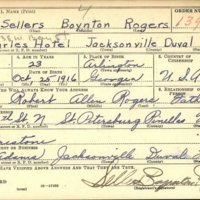