Certificate of Marriage for Edward John Seidel and Harriet Bender

Certificate of Marriage for Edward John Seidel and Harriet Bender

Certificate of Marriage for Seidel and Bender

Born on March 6, 1915, in Buffalo, New York, Seidel grew up in New York State before moving to Northern Virginia to work for the United States Department of Agriculture. He married his first wife, Mildred Lunsford, in 1938, and fathered four children: Lance, Mary Ann, Walter and Daniel. Seidel enlisted in the United States Army on May 7, 1945. In 1967, Seidel and his wife divorced. After marrying Harriet Bender in 1967, the family lived in Delaware before moving to Central Florida in 1992. On September 1, 1996, Seidel passed away at the age of eighty-one. The Florida National Cemetery in Bushnell, Florida, placed a memorial headstone in honor of Seidel and his service.

Digital reproduction of original marriage certificate recorded by the Clerk of the Circuit Court, September 20, 1967.

Originally created and published by the Commonwealth of Virginia. 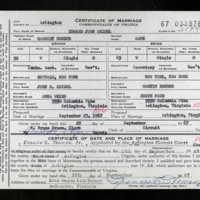