The draft registration card for Edward John Seidel (1915-1996). The card lists a serial number, the name of the registrant, the order number, the place of residence, the mailing address, telephone, age, place of birth, state, date of birth, the reference and their address, their employer and place of employment.

Born on March 6, 1915, in Buffalo, New York, Seidel grew up in New York State before moving to Northern Virginia to work for the United States Department of Agriculture. He married his first wife, Mildred Lunsford, in 1938, and fathered four children: Lance, Mary Ann, Walter and Daniel. Seidel enlisted in the United States Army on May 7, 1945. In 1967, Seidel and his wife divorced. After marrying Harriet Bender in 1967, the family lived in Delaware before moving to Central Florida in 1992. On September 1, 1996, Seidel passed away at the age of eighty-one. The Florida National Cemetery in Bushnell, Florida, placed a memorial headstone in honor of Seidel and his service. 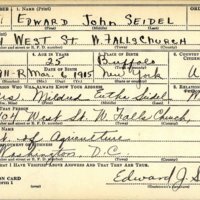