The seventeenth issue in the fourth volume of The Watermark was published on August 21, 1997, and featured a broad range of recent developments and interesting stories in the LGBTQ+ (Lesbian, Gay, Bisexual, Trans, Queer/Questioning, and others) community. Topics discussed in this issue include an interview with acclaimed women's tennis champion, Billie Jean King, a look at LGBTQ+ individuals living in Central Florida suburbs, and the new phenomenon of gays and lesbians using America Online (AOL) chatrooms to find friends and partners. This issue also highlights the various responses of certain Christian denominations regarding recent events in the LGBTQ+ community, such as the Southern Baptist call to boycott the Walt Disney Company for its high number of gay and lesbian employees. Throughout the issue are continued reports on AIDS medications, as well as information regarding court cases in the community. 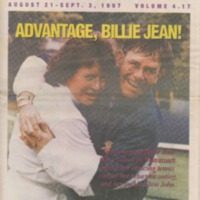