The twentieth issue in the fourth volume of The Watermark was published on October 2, 1997, and covers relevant news in the LGBTQ+ (Lesbian, Gay, Bisexual, Trans, Queer/Questioning, and others) community. The cover story features the discrepancy in Public Broadcasting System (PBS) programming regarding the gay and lesbian television magazine, In the Life. The show was hosted by Katherine Linton and aired in all major Florida cities except Orlando. Other stories include an interview with lesbian author Patricia Nell Warren regarding her latest novel in The Front Runners series, an interview with gay author Ethan Mordden about his latest installment in his "Buddies" series, Some Men Are Lookers, and a collection of anecdotes about LGBTQ+ individuals' first experiences at gay bars. Additionally, this issue provides updates on the decline in new AIDS cases and new breakthroughs in treatment for AIDS. Other topics covered included the court case of a Washington State teen, who had been bullied at school for being gay, and a local theatre production of Life In Other People's Shoes. This issue of The Watermark deals heavily with the concept of gay culture, especially as it is found in mass media, such as literature and television, and its lasting impact on LGBTQ+ individuals. 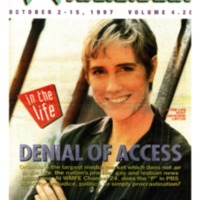