The twentieth issue in the eighth volume of The Watermark was published on September 27, 2001 and came after the tragic events of September 11, 2001. Throughout the issue, many columns focused on the tragedy, highlighting the experiences and reactions of the columnists. A re-printed article was featured from the Washington Blade about some members of the LGBTQ+ (Lesbian, Gay, Bisexual, Trans, Queer/Questioning, and others) community who were lost in the terrorists attacks. Prominent among these individuals was gay public relations executive, Mark Bingham (1970-2001), who was on Flight 93. However, despite the freshness of pain and loss in this issue, there was a concerted effort to focus on some of the more positive events going on in the LGBTQ+ community, such as the 12th Annual Tampa International Gay and Lesbian Film Festival and the Hope &amp
Help Center's Headdress Ball. Also highlighted were occurrences in the international LGBTQ+ community, such as the possibility of the Czech Republic recognizing same-sex partnerships, and a gay Cairo teen sentenced to prison. This issue of The Watermark strikes a balance between hurt and loss with positivity and community while maintaining the paper's unique outlook on all events. 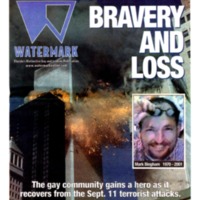