The Thirteenth United States Census records for Jenkins County, Georgia for 1910. The census divides the population by sex, race, age, marital status, number of children, occupation, literacy, whether they owned or rented, farm or house, if they were a Civil War veteran, whether they were blind, deaf or dumb, the place of birth and mother tongue of foreign-born persons and their parents. If foreign born, the person was required to provide the year they immigrated, whether they were naturalized and if they were able to speak English. In this census, Crozier Williams (1895?-1948) (line 87, spelled Crazier Williams) was listed as eighteen years old and was held as a convict at the Jenkins County Convict Camp in Militia District 1634.

Crozier Williams was born in Waynesboro, Georgia sometime between 1892 and 1895, according to various records of his life and service. In the years before World War I, Williams was arrested and held at the Jenkins County Convict Camp in Birdsville, Georgia. He registered for the draft on June 5, 1917 and was eventually drafted for service on June 20, 1918 in Florida. He served in Company E of the 807th Pioneer Infantry. The unit was responsible for repairing and constructing roads, bridges, and railways. Williams received an honorable discharge on July 11, 1919 but continued to serve and was promoted on March 25, 1919 to Sergeant. After July 1919, Williams returned to his hometown, where he then lived with his wife, Neomia, and worked as a brakeman, a specialist in train brakes. He died in Dade, Florida in 1948 at the age of 53. He is buried in the St. Augustine National Cemetery at Plot D, Grave 77. 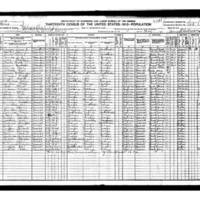