Register of Burial for Clyde Emerson, 1922

Register of Burial for Clyde Emerson, 1922

The register of burial card for Clyde Emerson (1890-1919). One side of the card describes where Emerson was originally buried and lists his emergency address, while the other gives the location of his reinterment. His body was reinterred after the end of the war.

Clyde Atwood Emerson was born on September 22, 1890 in Grand Rapids, Michigan, though he moved to Floirda in the early twentieth century. He attended high school and went on to work in the hospitality industry. On February 26, 1918, he was inducted into the United States Army and became a sergeant in the 81st "Wildcat" Division, where he served in the 318th Machine Gun Battalion

Leaving the United States for Europe on July 31, 1918, Emerson and his unit participated in many of the last major campaigns of World War I, inlcuding the Meuse-Argonne Offensive. This was the allied offensive that ended the war. Emerson survived the war and remained in Europe awaiting demobilization. During this time, Emerson contracted Spanish influenza, which would claim the lives of more soldiers and civilians than the war, and died on January 30, 1919. He was originally buried two days later in Aix-les-Bains, Savoie, France. However, he was later reinterred in December 22, 1922 at the Aisne-Marne American Cemetery in Belleau, France. Grave 8, Plot 11, Block B is his final resting place.

Originally created and published by the War Department, Office of the Quartermaster General, Grave Registration Service. 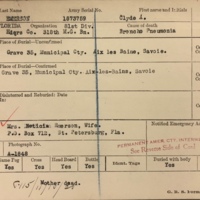 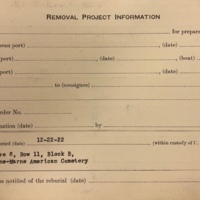