A program for the Orlando Gay Chorus' concert, "Premier Concerts", on June 23 and 24, 1990, at the Orlando Museum of Art. The program includes brief biographies of Music Director Dr. Charles Callahan, and Accompanist Terry E. Thomas, program notes, an outline of the show's itinerary, how to join the chorus, a list of the chorus members, and how to become a contributor. A ticket from the show is included. $2 of the suggested $10 donation went to the Chorus AIDS Outreach Fund. 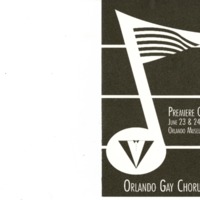