A program for the Orlando Gay Chorus' concert, "Sing... Be Merry", on December 13, 1992, at the Knowles Memorial Chapel at Rollins College in Winter Park, Florida. The program includes a message from President Bob Smedley, brief biographies of Music Director Dr. Charles Callahan and Accompanist Ken Thompson, II, a brief history of the GALA Choruses, program notes, a donors' list, advertisements, an outline of the show's itinerary, how to join the chorus, lyrics to four songs, a list of chorus members and how to become a contributor. 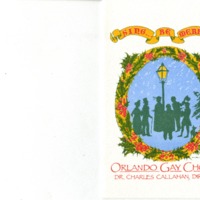