A program for the Orlando Gay Chorus' concert, "Proud World, Pride Concert", on June 9 &
10, 1992, at the Edyth Bush Theatre in Winter Park, Florida. The program includes a message from President Bob Smedley, brief biographies of Music Director Dr. Charles Callahan, Accompanist Ken Thompson, II and guest soloist Suellen Fagin-Allen, a brief history of the GALA Choruses, program notes, an outline of the show's itinerary, a checklist of concert etiquette, how to join the chorus, a donors' list, advertisements, a list of chorus members and how to become a contributor. It also contains a membership application, and an insert advertising a silent auction. 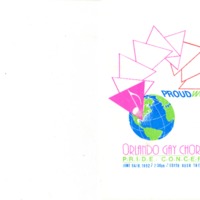