World War I List of Men Drafted for Service

A 1918 draft list for Tampa, Hillsborough, Florida. Approximately 24 million men registered for the draft in 1917 and 1918. Those who were drafted reported to their local draft boards and then traveled to camp, where they were inducted into and trained for the United States Army. To keep track of draftees and whether they reported for duty, each local board created forms. Form 1029 PMGO provided information including name, order number, serial number, call number, primary industry, classification, report date, entrainment location, and the local board itself. John Watkins (1889-1918) is listed with order number 2233, serial number 953, and primary industry of autodriver. He has a mark in both Classifications I and II, though both meant he would eventually be eligible for service, and an X in the column for those who failed to report to military authorities.

John Watkins was born on February 22, 1889 to James and Sarah Watkins in Ocala, Florida. Little is known about his life before the war. At age 29, he was inducted into the United States Army in Tampa, Florida on June 21, 1918. He was then sent to train at Camp Dix in New Jersey, as a Private in the 807th Pioneer Infantry, an all-black segregated unit. On September 4, 1918, the 807th departed from Hoboken, New Jersey to France aboard the USS Siboney. Soon after arrival in Europe, Watkins was promoted to the rank of Corporal, likely because he could read, write, and drive. Though the 807th served in a non-combatant role, they were often in the thick of battles, such as the Meuse-Argonne Offensive, the last major engagement of the war, building and repairing infrastructure. Watkins survived the war and remained in France, continuing to repair roads and bury the dead. Within a month, on December 8, 1918, Watkins died of pneumonia, likely caused by the influenza epidemic. He is buried in the Meuse-Argonne American Cemetery at Plot H Row 6 Grave 23. 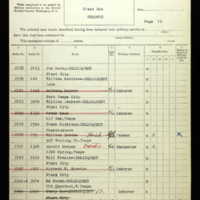