The draft registration card for Andrew Jackson (1893-1937). Approximately 24 million men registered for the draft between 1917 and 1918. The cards recorded name, age, date and place of birth, race, and occupation, and a corresponding registrar's card listed physical features.

Andrew Jackson was born in July 1893 in Sparr, Florida, though his draft card lists May 16 as his birthday. Little is known about his early life. He registered for the draft, like many, on June 5, 1917, and was inducted into the United States Army in August 1918. From September 1918 to July 1919, Jackson served as a private in Company M of the 807th Pioneer Infantry. The unit served in a technical capacity, constructing and repairing infrastructure, and this work often brought them in direct action with the enemy. Jackson was discharged on July 9, 1919. He returned to Florida and married his wife, Lucille, with whom he had three children. He worked for the Flroida East Coast Railroad until his death on November 4, 1937. He is buried in the St. Augustine National Cemetery at Section A Grave 216.

Originally created and published by the War Department, Office of the Quartermaster General, Selective Service System. 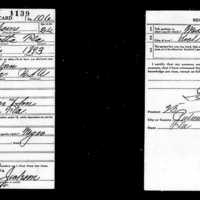