The draft registration card for Commodore Isaac Murray (1896?-1947). Approximately 24 million men registered for the draft between 1917 and 1918. The cards recorded name, age, date and place of birth, race, and occupation, and a corresponding registrar's card listed physical features.

Commodore Isaac Murray was born in New Augustine, Florida in October sometime between 1895 and 1897 (his records give conflicting dates). He grew up in St. Augustine with six siblings. Like many, when the United States entered the World War, Murray registered for the draft on June 5, 1917, and he was inducted into the United States Army on August 4, 1918. He served as a private in Company D of the 546th Engineers from September 11, 1918 to August 26, 1919. The Engineers battalions were responsible for a wide range of behind-the-lines work, such as repairing roads and building barracks to keep the rest of the army moving. After returning to the United States, Murray was honorably discharged on September 12, 1919. He returned to his hometown where he lived with his wife and children until his death on October 18, 1947. He is buried in the St. Augustine National Cemetery at Section D Grave 87.

Originally created by C.W. Leonard and published by the War Department, Office of the Provost Marshal General, Selective Service System. 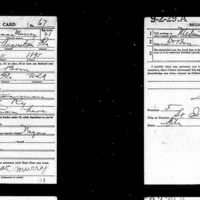