Thomas Robert Savage was born on March 27, 1892 in Eastern Shore, Virginia. Though little is known about his childhood and early life, we do know he could read and write. On June 5, 1917, Savage, like many, registered for the draft in Portsmouth, Virginia. It is likely he married his wife, Della, before being inducted and serving in Europe. He was inducted into the United States Army on August 3, 1918 and served as a corporal in Company C of the 540th Engineers. From October 27, 1918 to May 21, 1919, Savage and his unit worked overseas in a behind-the-lines role, repairing roads and building barracks to keep the rest of the army moving. After returning to the United States, he resumed life with his wife. They eventually moved to Maryland, where Savage worked as a driver. He died on April 7, 1941. He is buried in the St. Augustine National Cemetery, Florida at Section D Grave 3.

Originally created by William R. Jones and published by the War Department, Office of the Quartermaster General, Selective Service System. 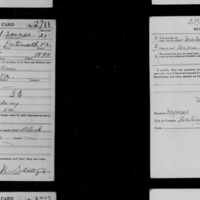