A letter from Myrtle Colson, manager of the May Museum of the Tropics, to the owner of the museum, John M. May, dated February 25, 1959. Colson discusses a surprise audit from the owners of Weeki Wachee, The Florida Chain of Theaters. She writes that a comptroller visited the museum, inquiring about the museum's accounting books and records of business. 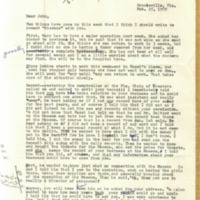