A letter from Myrtle Colson, manager of the May Museum of the Tropics, to the owner of the museum, John M. May, dated March 28, 1956. Myrtle writes that earlier in the day, she allowed an African-American couple to enter the museum, as he had instructed employees to do. Later in the day, after news spread to Joe Seltzer, manager of Weeki Wachee Springs, he reprimanded her and instructed her not to let any other African-Americans in the museum. He also told her to put up a sign that read, "We reserve the right to refuse admission to anyone". Myrtle writes that she tried to defend her decision, citing a Supreme Court decision, to which Seltzer replied that the decision did not apply to the Springs. 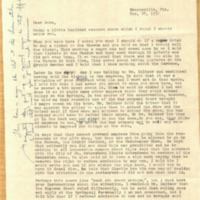