Employee Rules and Regulations for the May Museum of the Tropics

Employee Rules and Regulations for the May Museum of the Tropics

May Museum of the Tropics Employee Handbook

Six pages of the May Museum of the Tropics employee handbook. The owner of the museum, John May, created the handbook for his employees to follow in the 1960s. The table of contents on the first three pages gives insight to what is included in the missing pages of the handbook. The other three pages explain how employees should approach the public, list what actions are and are not permitted, and provide instructions for handling an emergency.

Digital reproduction of original 8-page typewritten handbook by John May.

Originally created by John May and published by May Natural History Museum. 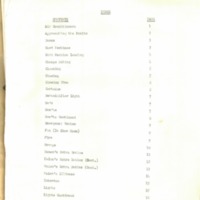 May, John. “Employee Rules and Regulations for the May Museum of the Tropics.” RICHES of Central Florida accessed July 1, 2022, https://richesmi.cah.ucf.edu/omeka/items/show/10506.