A letter from the manager of the the May Museum of the Tropics, Myrtle Colson, to the owner of the museum, John May. The letter details concerns that the manager was having with an employee as well as her complaints about being excluded from certain business matters. As John May lived in Colorado and the May Museum of the Tropics was located in Florida, communication between employer, employees, and other staff at Weeki Wachee Springs was limited predominantly to letters of correspondence.

Digital reproduction of original 3-page letter from Myrtle Colson to John May, February 11, 1961. 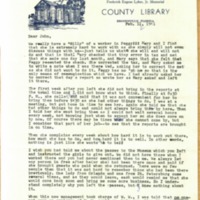